The Johnston County Center is open 8 a.m.-5 p.m. but many events have been postponed or changed. Please check this site or call for updates.

Find this article at:
go.ncsu.edu/readext?686965
— Written By Tim Britton (1 month ago) and last updated by Crystal Pope

This past weekend, a stripe rust alert was issued by Dr. Cowger and Dr. Post.
Stripe Rust Alert

Over the last week, stripe rust has been reported in several counties across North Carolina. A stripe rust epidemic can develop much quicker than a leaf rust epidemic. If scouting reveals stripe rust in your field, a fungicide should be applied as soon as possible to preserve yield. Wheat varieties rated susceptible (S) and moderately susceptible (MS) should be scouted immediately. Resistant (R) or moderately resistant (MR) varieties are at low risk. Consult the Variety Characteristics Sheet to determine Stripe Rust susceptibility for common varieties. Apply fungicides to fields containing multiple stripe rust foci first before moving on to fields with less noticeable infections.

When choosing a fungicide, pay close attention to harvest restrictions on the label. Table 2 is an abbreviated recommendation list. The table only includes fungicide products with an excellent stripe rust rating. The fungicides Prosaro, Caramba, and Folicur provide excellent protection against a stripe rust epidemic. Generic versions of the same active ingredient will provide equivalent control. These fungicides have a 30-day pre-harvest restriction, so use caution when applying to fields nearing harvest. Stobilurin-only products such as Aproach and Headline are less effective when used alone after a stripe rust infection has occurred. Aproach Prima also provides excellent protection against stripe rust; however, this fungicide has a 45-day pre-harvest restriction and should only be applied to varieties that are still in boot and not yet heading. As a reminder, Feekes 10.5 is heads fully emerged from the boot and Feekes 10.5.1 to 10.5.4 is the flowering stage.

After walking several fields today all over the county, I did not find any stripe rust, but every field I went in had leaf rust. I also used the variety guide to determine leaf rust resistance.

ALTHOUGH, I DID NOT FIND STRIPE RUST, we most likely have it. With that said, you should consider treating your wheat for stripe rust if your variety is rated S or MS and you have good yield potential. Products that control stripe rust controls leaf rust. Powdery Mildew was fading with hotter temperatures slowing this disease. However, for the next 2 weeks, temperatures are forecasted to be below normal with normal rainfall. 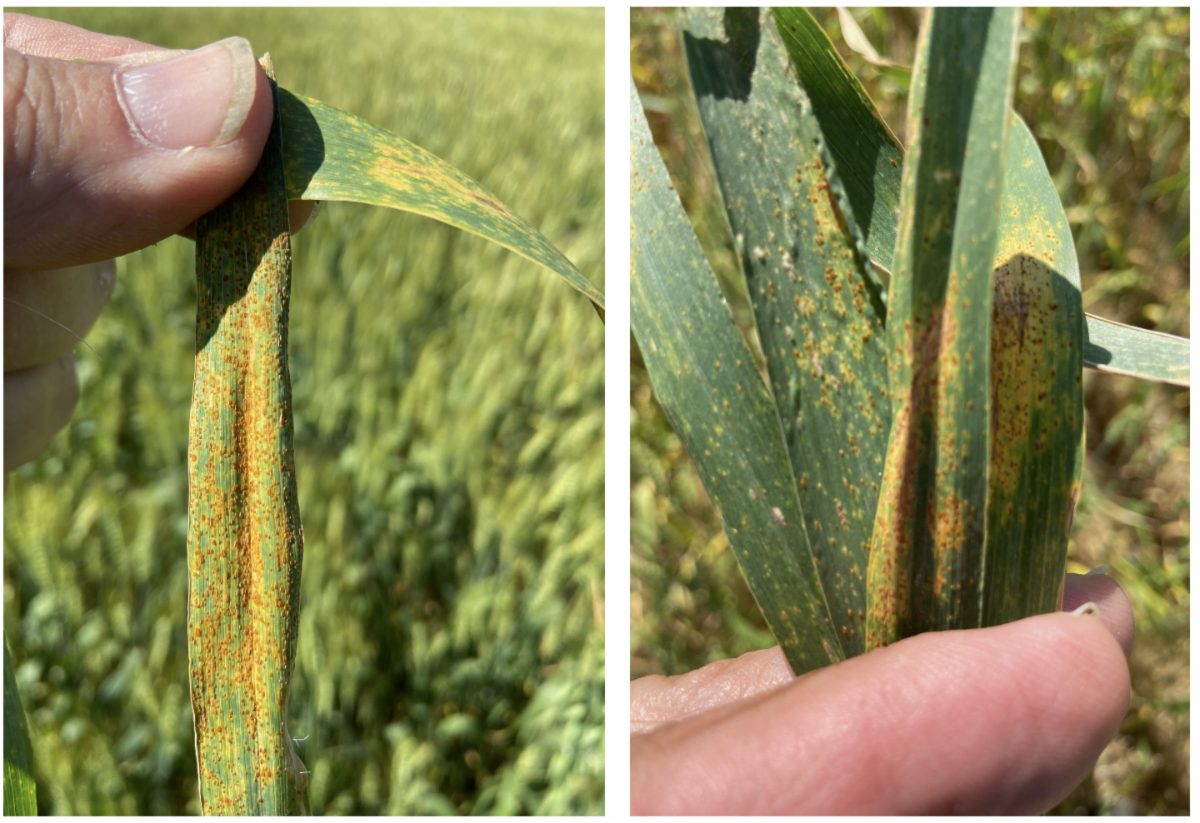 Please continue to scout your wheat until the harvest interval interferes with the application.
share Share This Article